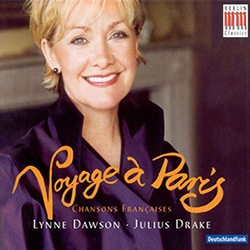 Here isabit of surprise. And a delight. A disc from Berlin Classics of essentially Parisian songs, with – Lynne Dawson, more often associated with – the classical repertory, proving herself totally at home with music of the belle époque and the 1930s. She is accompanied by Julius Drake in splendid form.
He seems to find an original way with each song, so that even something as familiar as Chabrier’s L’ule heureuse emerges fresh, and the tiny touches of rallentando and unexpected soft echo effects make one listen to the song as if for the first time. In one or two of the big, dramatic settings such as Chausson’s Le temps des lilas one might ask for a fuller sound than Dawson produces, but her feel for the texts, silvery tone and completely unfussy way with the language bring rewards in every track.
Poulenc gets the lion’s share here. Three of the melodies are to poems by Louise de Vilmorin. In ‘C’est ainsi que tu es’, Drake and Dawson manage to suggest the lover whispering at ‘Voila, c’est ton portrait’, while the solemn ‘Mon cadavre est doux comme un gant’ has a definite foretaste of Carmélites. ‘Violon’ is taken very slowly, bringing out all the erotic tension. In ‘Les chemins de l’amour’ the final verse has just the right mixture of nostalgia and mystery. As for the outrageous ‘Nous voulons une petite soeur’, I suspect this is one of Julius Drake’s favourite songs; many years ago he gave an explosive performance of it with Hugues Cuénod at the Wigmore Hall.

The Hahn songs are all well known, the sprightly rondel ‘Quand je fus pris au pavilion’ contrasting with the reflective A Chloris and the ecstatic Le rossignol des lilas, a poem by the enigmatic composer!

writer Leopold Dauphin. Chausson’s Hébé is something of a rarity, a beautiful evocation of ancient Greece. The three Fauré songs are like episodes in a love story, two Armand Silvestre poems framing Après un réve by Romain Bussine. There are too many good things here to detail: the entire programme is a celebration of the best in French song.