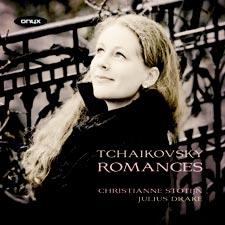 This beautiful collection of 20 Tchaikovsky songs represents the whole range of his creative life from his first performed composition “My Genius, My angel, my friend,” written when we was 16, through to the last published song from the year of his death “Again, as before, alone”. Includes favourites such as “None but the Lonely Heart” and “Why?” but also rarely heard songs such as “Mild Stars Looked down”, “The Cuckoo” and “The Gypsy Song”
Christianne learnt Russian especially for this recording and toured it widely before recording it with her superb pianist Julius Drake. This recording should do much to re-evaluate Tchaikovsky as one of the greatest composers of song and not just a writer of pretty tunes.
Both Christianne’s previous recitals earned rave reviews: “a really exciting event” (Gramophone); The most impressive debut disc since Bryn Terfel was a lad (***** Classic FM magazine); Vocal Recording of the Month ***** (BBC Music Magazine) (ONYX4009) “astonishing sophistication “ ***** BBC Magazine “One of my recordings of the year” (Michael Kennedy, Sunday Telegraph) (ONYX4014)
Christianne was recently a BBC Young Generation Artist and has had London dates with Haitink (Mahler 2) and Das Lied von der Erde with Budapest FO/Ivan Fischer. Forthcoming highlights include Covent Garden debut (title role) in Tamerlano and Handel’s Jephthe with Paul McCreesh.

DISC OF THE MONTH
As singer and pianist tug telepathically here and there at this delicate music’s tempo, the world seems momentarily to stop turning.
Classic FM magazine, April 2009

A second volume, please, and soon! Highly recommended. The Times