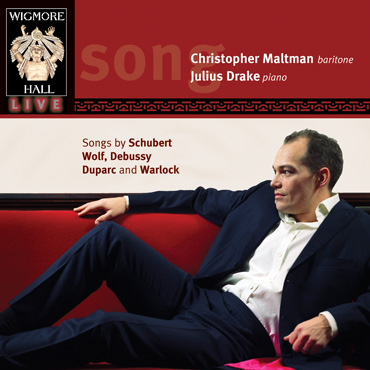 The young British baritone Christopher Maltman excels on the recital platform. Here he performs songs by Schubert, Wolf, Debussy, Duparc and Warlock with boundless charm and with a voice of astounding sensitivity, powerfully conveying an array of mixed emotions throughout.

Superbly aided by Julius Drake, Maltman’s dramatic interpretations are unsurpassed; his performance of Duparc’s La vague et la cloche was described by The Guardian as a ‘tour de force of baleful intensity’, in contrast to his ‘funny, bitingly satirical and faultless’ interpretation of Flanders & Swann’s Misalliance, sung as an encore.

It’s Maltman’s superb breath control which gives shape and sensuous beauty to Debussy and Dupare. And, thanks to Drake’s restraining pace, Warlock’s Captain Stratton’s Fancy’ has real swagger. Flanders and Swann’s little masterpiece… about the Honeysuckle and the Bindweed, ends the recital in raptuous applause.

Christopher Maltman… is remarkably skilful in the management of his voice, dealing wonderfully well with Debussy’s high tessitura and still plumbing the depths with ease as he does at the end of “Der Wanderer” and “La vague et la cloche”. Julius Drake is his perfect counterpart…