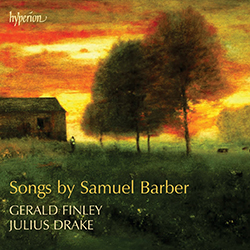 A Wonderful reminder of Barber’s skill as a songwriter, in ideal performances

This is a pretty stunning achievement. At his most mellifluous and focused, Gerald Finley has beauty of tone to spare. But he is also at his most expressive – hollowing out the voice for the hopelessness of the song “Bessie Bobtail”, letting it splinter with anger at the climax of the brief, furious “Sea Snatch”. Throughout, Julius Drake proves a predictably accomplished, thoughtful partner. The pair move easily and logically from the prettiness of the very early songs through the complexities of the Hermit Songs and the pensive Mélodies passagères. The overwhelming feeling here is of idealism tainted, though never quite shattered, by war, by poverty, by human nature. Finley only gains in power, attaining at points the kind of bitter life-force so well remembered from his performance in Turnage’s anti-war opera The Silver Tassie. It’s also a canny move to place Dover Beach as the final track. It may be an early work, but the introduction of the string quartet (the excellent Aronowitz Ensemble) to close the disc shifts the mood, sending us off in another direction. It comes as a hopeful reminder of the wonder of love, even with a sting in its tail. Entirely appropriate for a bittersweet, marvellous collection.

Classic FM Magazine (Dec issue) – 5 stars
“Having served the songs of Charles Ives with enormous distinction, the partnership of baritone Gerald Finley and pianist Julius Drake shift artistic gear to explore works by one of America’s greatest tunesmiths. Samuel Barber’s lyrical writing and subtle feeling for expressive shading were matched in his songs by a Britten-like aptness for word-setting, which ideally suits Finley’s compelling blend of emotional conviction and vocal flexibility. On the strength of his interpretation of the Hermit Songs alone, regardless of his majestic readings of Barber’s Rilke settings and Dover Beach, Finley enables this album to command its price as one of the year’s finest vocal releases.
Unmissable.”