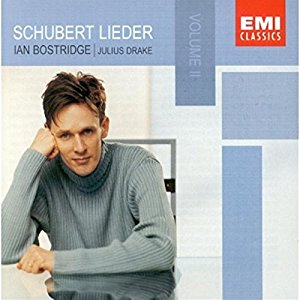 Ian Bostridge’s second Schubert recital for EMI (which features a welcome number of the less familiar songs) is even more impressive than the first–and that’s saying something. Much of the disc finds him in a somber mood, from the hymnlike tone of the first song, “Lied eines Schiffers an die Dioskuren” (“Sailor’s Song to the Dioscuri”), via “Nachtstück” (“Nocturne”) to “Wehmut” (“Melancholy”). But though the tone is frequently valedictory and the tempo often slow, there is never a lack of variety.

That is Bostridge’s achievement as much as Schubert’s–he has designed his program with great sensitivity, and his voice seems to have grown in soulfulness and depth (try “Abendstern”–“The Evening Star”–to hear how much he can wring out of such apparently simple lines) to be even more mellifluous than previously, cherishing each word and finding total accord with pianist Julius Drake. Bostridge delights, too, in the rare happier moments, such as two of the Goethe settings, “Geheimes” (“A Secret”) and “Versunken” (“Rapt Absorption”), which explore the lighter side of love. The recording is beautifully lifelike, and the liner notes are excellent. This is the work of a supreme artist caught at the height of his powers. –Harriet Smith

This, the second volume of mainly familiar Schubert Lieder performed by Ian Bostridge and Julius Drake, should prove as rewarding and memorable as the first. There is no particular theme to the programme, and the songs span most of Schubert’s career – from 1814 until 1827. There are pairings (such as Auf der Riesenkoppe and Sei mir gegrusst, with the last words of the first leading into the second), and little groupings of songs that are adjacent in the Deutsch chronological catalogue. Above all, one has the relaxed feeling that the performers chose these particular Lieder in this particular order because they sounded good that way, justifying the choice by the joy of the music-making and the beauty of the songs. The first half of the programme consists of five settings of Schubert’s melancholy friend Mayrhofer, and six of Goethe. Two each by Bruchmann (another friend) and Rückert, and single songs to words by Schiller, Rochlitz, Collin, Schulze, Körner and Matthisson conclude this very attractive disc. Richard Wigmore’s perceptive insert note guides the listener skilfully through the wide-ranging selection.Bostridge sings with deep insight into the essence of each song; his idiomatically inflected German is admirable, though final consonants occasionally lack the firmness of the native speaker. If low notes once or twice lack resonance and rounded quality, his voice is supple, eloquent and easeful throughout a wide dynamic and emotional range, with finely floated quiet phrases, and vehemence in Schubert’s occasional outbursts (the opening of An die Leier, for instance). Julius Drake is an imaginative as well as a sympathetic interpreter of the piano parts (which are seldom mere accompaniments). Whether invoking the calm at the close of Nachtstuck, the ardour of the night-ride and tryst in Willkommen und Abschied, or the only half-serious spookiness of Der Geistertanz at the end of the disc, he sets the scene and portrays it with masterly insight and control. The piano tone is well captured (apart from a touch of jangle in Auflösung). The recording aptly balances instrument and voice, forward yet not too close. This is a recital of great distinction. –Peter Branscombe