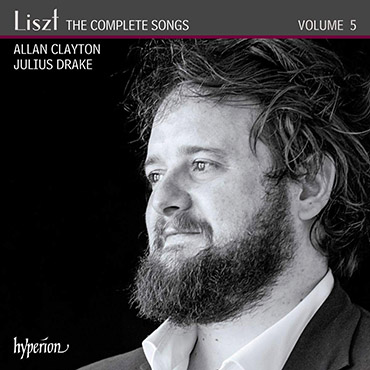 Franz Liszt’s songs attest to an intermittent commitment to this genre over a span of forty-plus years and to his habit of revising songs in order to find new music in them. Although he was a consummate cosmopolite, setting poetry from Italian, British, French, German, Hungarian, Russian and even American literature, the performers on this recording hew to his Paris and Weimar milieux. As in the earlier volumes of this series, the denizens of poetry’s Mount Olympus—Goethe, Heine, Hugo—rub shoulders with poetasters from Liszt’s aristocratic circles and friends with few pretensions to poetic aptitude. Most of his songs—in his old age, all of them—were not directed at the same public who worshipped at the altar of virtuoso performers, although there are marvellous aria-like exceptions in the early repertory; rather, Liszt used song to ‘hurl my lance as far as possible into the boundless realm of the future’ (his words). By the end, song was a matter of mourning as well: an elderly man, acquainted with grief, concocted a bitter new vocabulary of music. He was especially beguiled by song during the Weimar years from 1848 to 1861; he had already written at least twenty songs by then, and he began both to revise them and add to their number. The fine lyric tenor Franz von Götze (1814-1888), the mezzo-soprano Emilie Genast (nicknamed ‘Mici’, 1833-1905), and Rosa (born Agthe, 1827-1906) and Feodor von Milde (1821-1899) were all coached and accompanied by Liszt himself at his Altenburg residence in Weimar, and they took the gospel of Lisztian song everywhere they performed.

“Another fine disc in an exceptional series.” – Gramophone

“This fifth volume of Julius Drake’s superb series of Liszt songs on Hyperion sees the young British tenor Allan Clayton bringing the same compelling mixture of ardour and vulnerability that made his Glyndebourne Hamlet such a sensation to a selection of German and French songs: the latter, in particular, suggest that the voice is on the cusp of a transition into more dramatic territory, which had me crossing my fingers that he’ll be playing a key role in next year’s Berlioz anniversary celebrations and eagerly awaiting his imminent assumption of Britten’s Peter Grimes. Spotlit by a pleasingly dry acoustic which allows every thoughtful detail to register, Drake is characteristically eloquent and imaginative throughout – listen, for instance, to the two completely different moods which he invokes with a simple repeated phrase in the space of just two bars in the opening of ‘Morgens steh’ ich auf und frage’.” – Presto Classical
X
We use cookies to ensure that we give you the best experience on our website.Accept and continueRead more