A Journey Through Venice 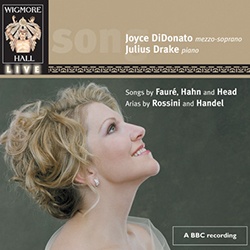 A Journey Through Venice: Songs by Fauré, Hahn and Head, Arias by Rossini and Handel

Joyce DiDonato consistently earns ecstatic reviews wherever she sings. Among the world’s most charismatic performers, honours bestowed upon Joyce DiDonato include the Met’s Beverly Sills Award, the Royal Philharmonic Society’s Singer of the Year, the Richard Tucker Award – given to a single American singer annually, second place in Plácido Domingo’s Operalia, and prizes from the George London Foundation, the ARIA Award Foundation and the Sullivan Foundation.

A favourite with Wigmore Hall audiences, Joyce DiDonato opened the 2008/9 season with a programme which included a selection of songs by Fauré, Head and Hahn, and arias by Rossini and Handel.

The sparks fly from the opening set, Rossini’s La regata veneziana… as DiDonato seizes upon the songs’ operatic impulses. There’s a frenzied urgency in the second song, “Anzoleta co passa la regata”, for example, that conveys the intense excitement of the race and the passionate palpitations of the woman watching her lover speed towards victory. Throughout, Julius Drake’s affectionate, finely shaded playing is an absolute delight.