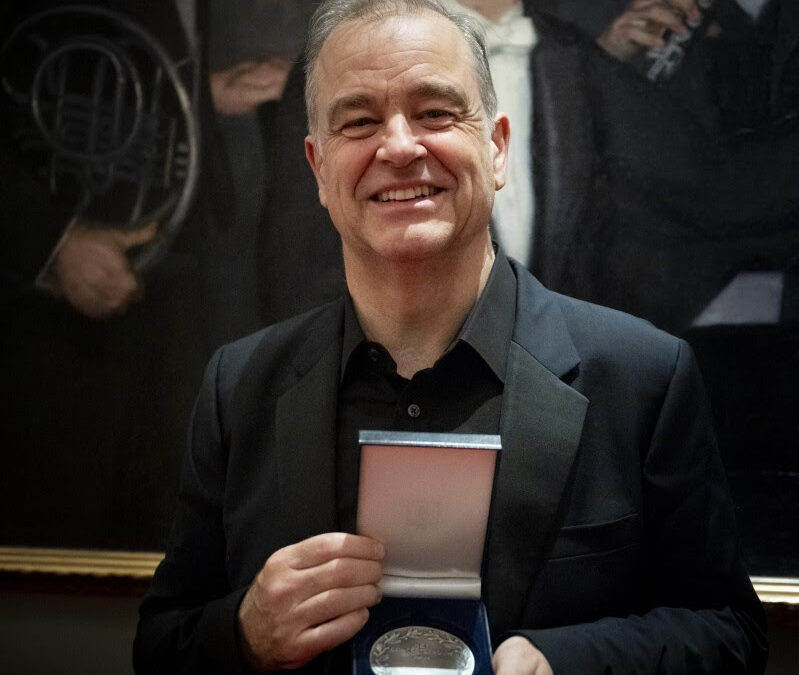 Last night in the Recital Hall the British pianist & song accompanist Julius Drake received the Concertgebouw Medal at a concert with mezzo-soprano Feride Büyükdenktas. The presentation came as a complete surprise. At the close of his concert, this medal was presented to him for his exceptional contribution to the artistic profile of the Recital Hall over the years. He has accompanied countless numbers of singers, from little-known talents to the biggest performers. The Concertgebouw Medal has been awarded 99 times since 1928. Previous recipients include music greats such as Yehudi Menuhin (1963), Arthur Rubinstein (1971) and Alfred Brendel (2008). 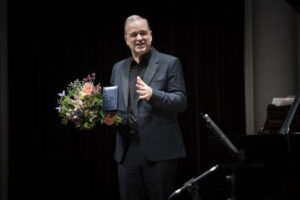 Managing director Simon Reinink presented the medal: ‘Julius Drake is one-of-a-kind: as a master accompanist, music curator and advisor to top vocal talent. He has left a significant mark on the Recital Hall!‘ Originally, Julius Drake was supposed to be surprised with this medal at the Mahler Festival in May 2020, which was cancelled due to the Covid pandemic. For over 2.5 years, family and friends kept this under wraps. In a concert hall filled with friends and close acquaintances the British pianist expressed how moved he was: ‘I want to thank The Concertgebouw for this great honour. It has taken me completely by surprise. This is one of the greatest halls in the world, with such exciting programming. I have been thrilled over these many years to have been associated with it!‘ 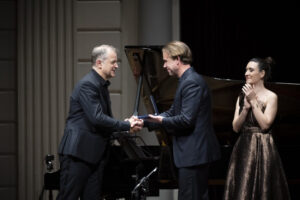 Julius Drake is a regular guest at venues such as Carnegie Hall and Lincoln Center in New York, Wigmore Hall in London, La Scala in Milan, the Philharmonie in Berlin and the Musikverein and Konzerthaus in Vienna. He also appears at festivals such as those in Edinburgh, Lockenhaus, West Cork and Salzburg, and at the BBC Proms and Schubertiade in Schwarzenberg. The British pianist gives master classes all over the world and has his own song accompaniment class at the University of Music and Performing Arts in Graz. He is the artistic director of the Machynlleth Festival in Wales.

He also presents the annual recital series Julius Drake and Friends at London’s Middle Temple Hall, with singers such as Sarah Connolly, Simon Keenlyside, Willard White and Roderick Williams. Julius Drake has recorded songs by Tchaikovsky and Mahler with Christianne Stotijn and works by Kodály and Schoeck with cellists Natalie Clein and Christian Poltéra. A Liszt album with Angelika Kirchschlager received a BBC Music Magazine Award, recordings with Gerald Finley were given a Gramophone Classical Music Award and the Poetisches Tagebuch (Poetic Diary) with Christoph Prégardien received the annual German Record Critics’ Award in 2016.

Among his recent CDs are Janáček’s Diary of a Lost Man with Nicky Spence, The Garden of Eve with Anna Prohaska and Argento’s Diary of Virginia Woolf with Alice Coote. Julius Drake’s most recent performances in the Recital Hall were in March 2020 with tenor Ian Bostridge (Schubert) and in December 2022 with mezzo-soprano Feride Büyükdenktas (Schubert, Schumann and Güran).